Analyzing Reactions Ahead of The Merge

Analyzing Reactions Ahead of The Merge

As many crypto enthusiasts are aware, the Ethereum mainnet will merge with the Beacon Chain around September 15th or 16th. This move will increase the security, scalability, and sustainability of the Ethereum blockchain. Ahead of this move, Ethereum contributors and speculators are having all kinds of reactions. In this post, we will analyze the quantifiable GitHub and Community metrics ahead of ETH 2.0.

How do nodes have to adapt to The Merge?

Any full nodes that are currently running Geth are encouraged by Ethereum to run a consensus client in advance, so that The Merge can happen smoothly.

The first thing that I look at is active issues. Are the issues that are being opened in the Ethereum repository being solved? How quickly are issues being solved? Are they piling up on each other or is there a nice cadence in solutions vs. new problems.

As of August 18, 2022 (approx. one month before The Merge) here is the Ethereum active issues chart: 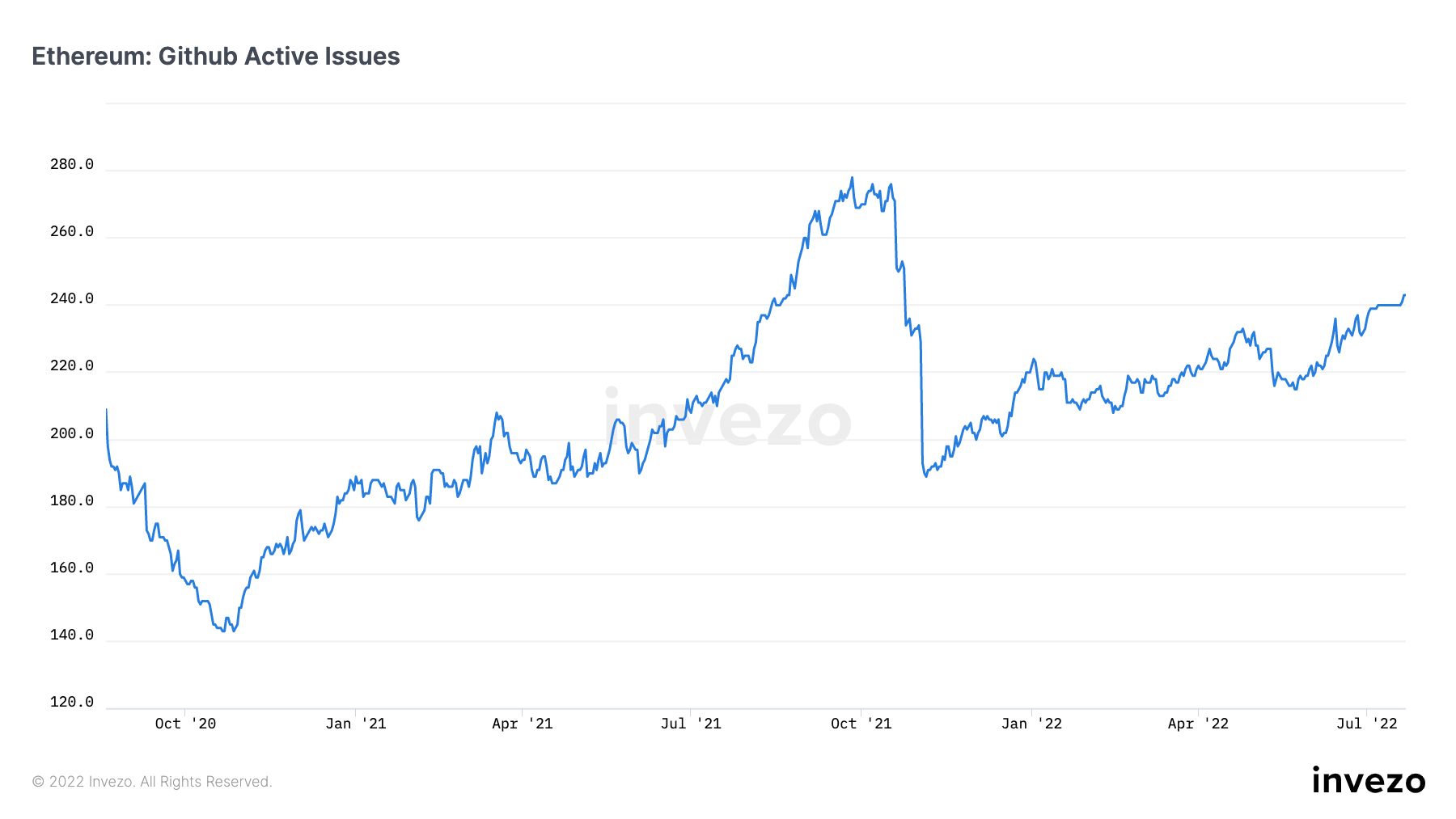 It looks like this repository has a great cadence of solving active issues, with a general decline from the end of 2019 to early 2021, then remaining somewhat constant since Jan ‘21.

Commits are always an important metric to analyze. As GitHub commits track code changes across files as edits are made, this metric can give incredible insight as to the value of an asset’s source code. 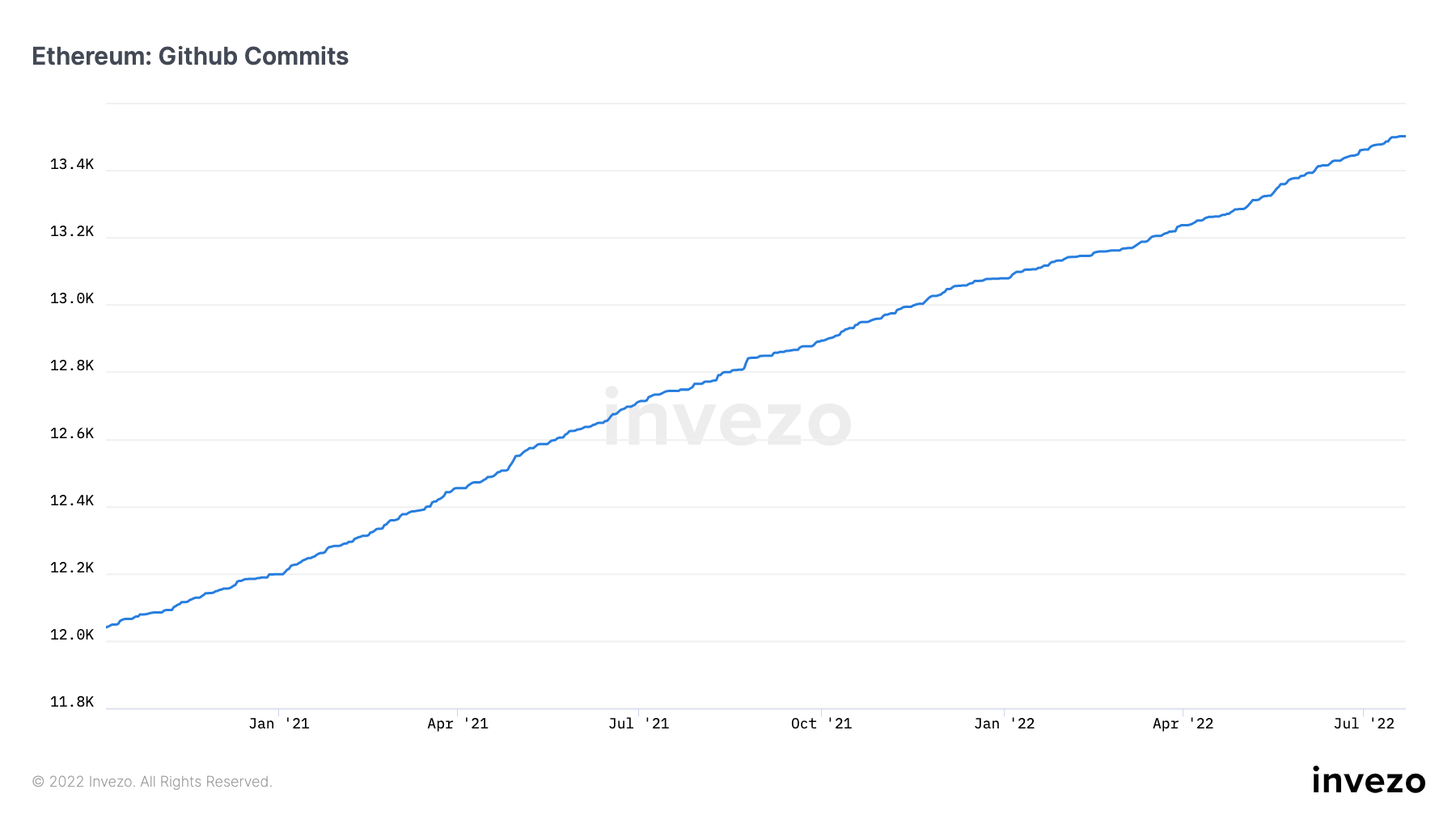 There seems to be no noticeable change in new commits for the past couple years.

Although GitHub watchers does not track any changes to source code, it’s a fantastic metric for measuring general community interest. Ahead of the merge, here is the most recent chart for GitHub watcher growth. 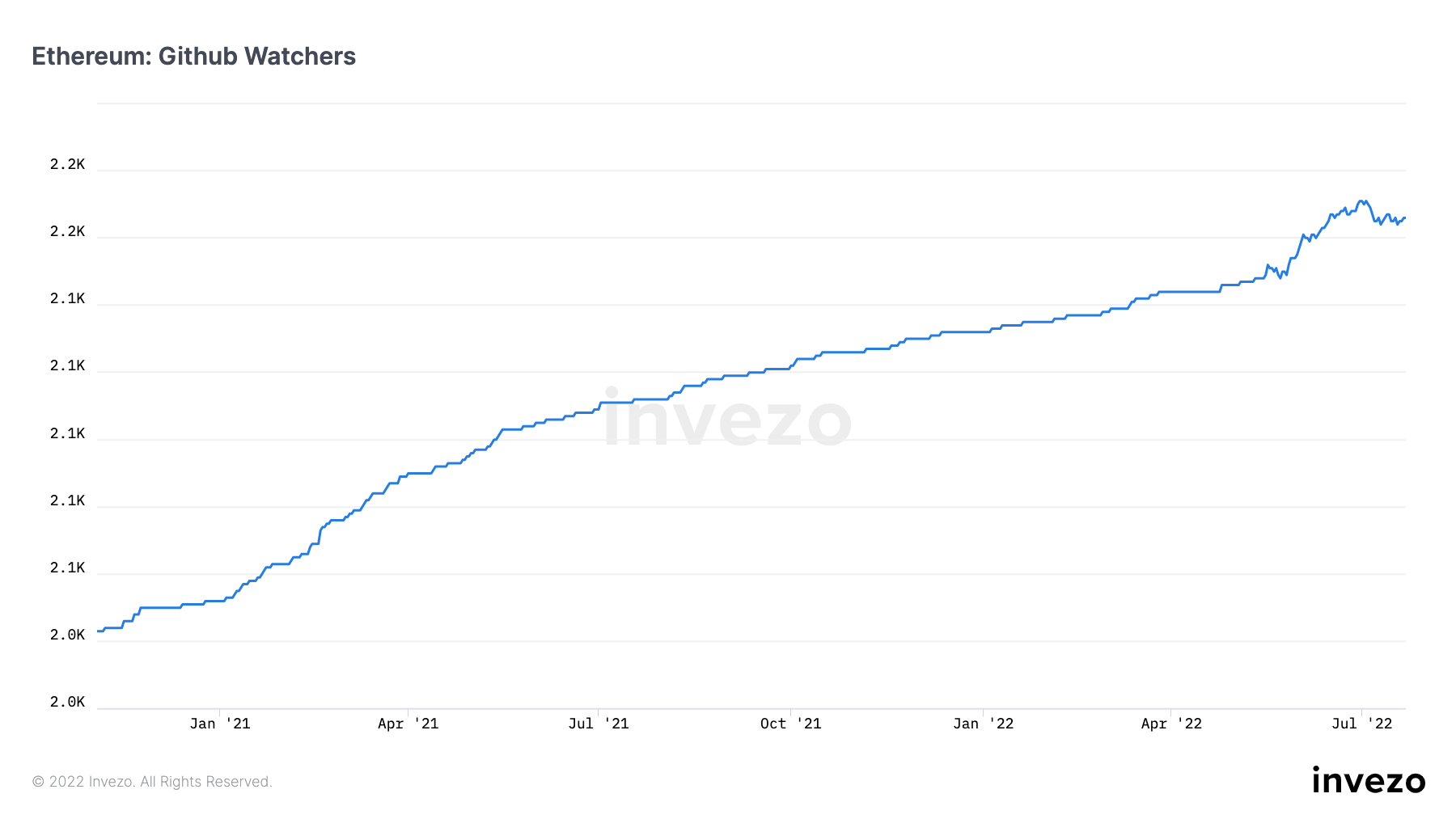 We see a slight spike at the end of June ‘22, but it seems to largely return to the same growth rate.

What are people saying?

Some are slightly more excited.

I tend to watch reddit subscribers, twitter followers, and tweet volume to asses the community reaction to asset news. While NEAR and SOL are dominating buzz tables, ETH is having some major community spikes (relative to its size).

Ethereum (https://reddit.com/r/Ethereum) Reddit subscribers have been on an accelerated growth pace since the end of May. 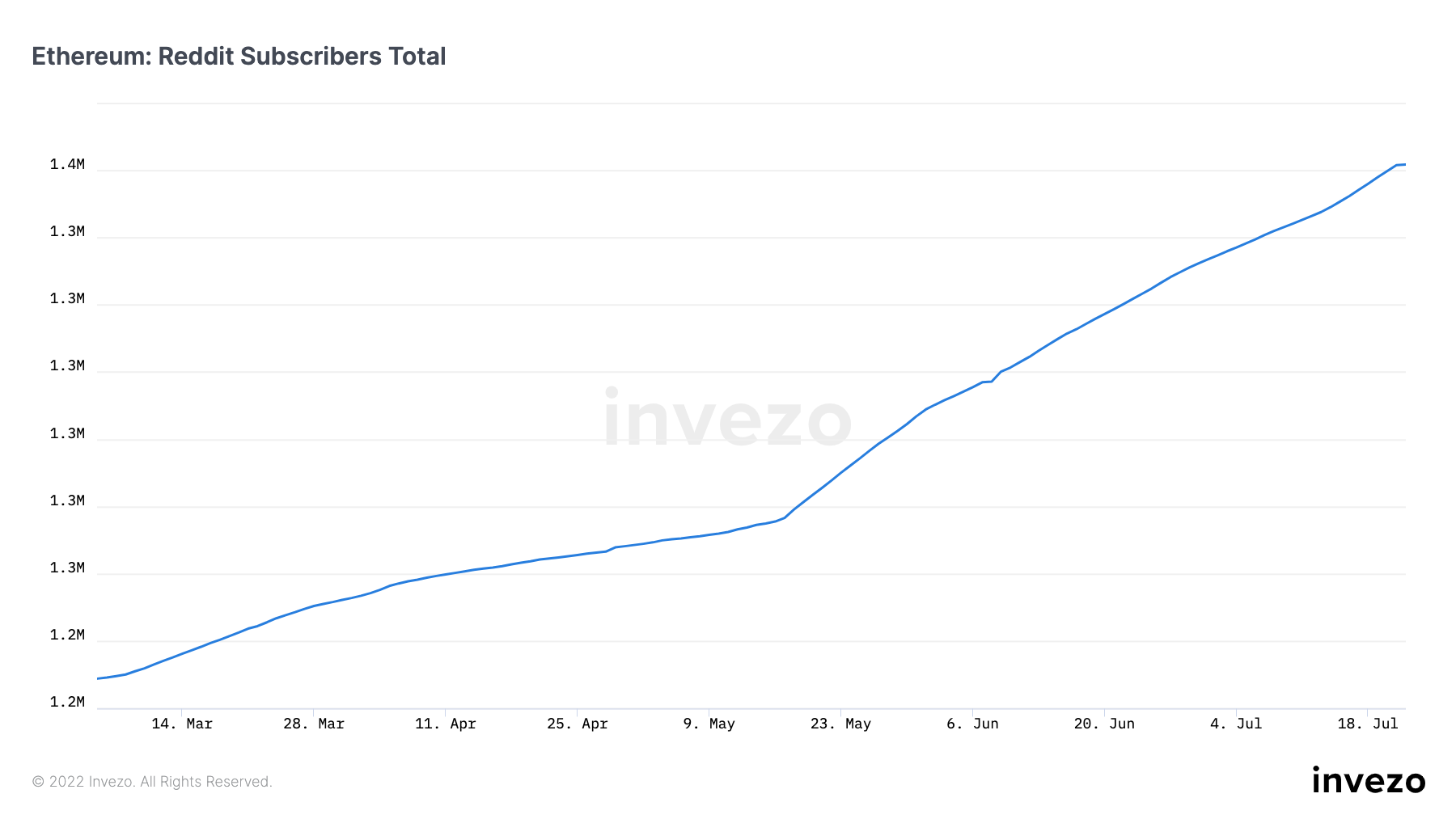 Ethereum’s (https://twitter.com/ethereum) Twitter follower growth has been on an accelerated pace starting with a big jump in May ‘22. This seems very similar to Reddit subscriber growth. 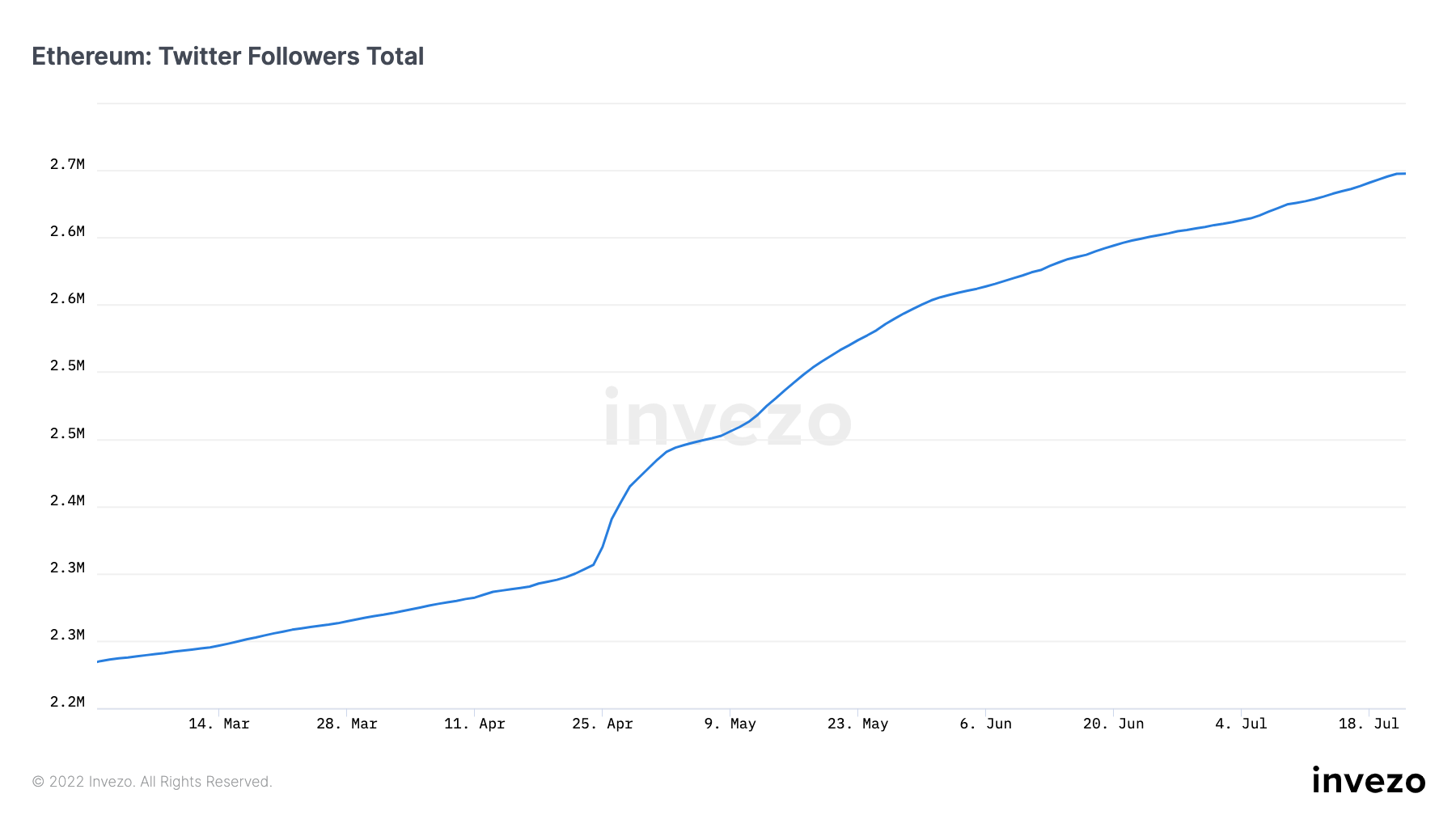 Ethereum tweet volume is peaking at around 12k mentions per hour everyday. We also see a massive spike towards the beginning of August. I expect that leading up to The Merge, discussion about ETH will only trend upwards. This is a metric we will be watching closely. 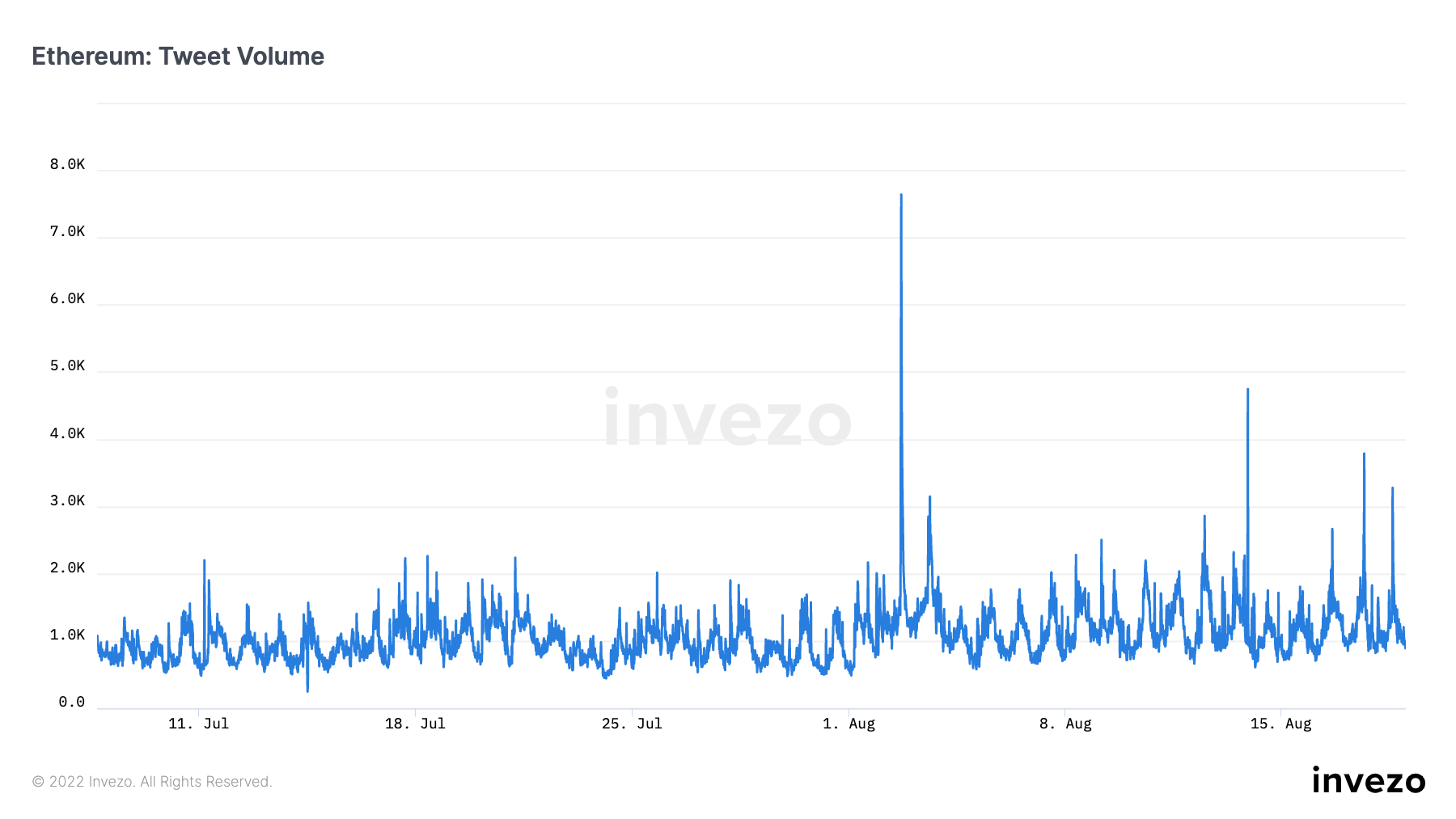 As the Ethereum team gears up for The Merge, there will undoubtedly be positive and negative reactions from the entire crypto community. By and large, it seems that developers are indifferent to The Merge, while investing communities seem more torn. Only time will tell what effect The Merge will have on the future of Ethereum and Ethereum investing.